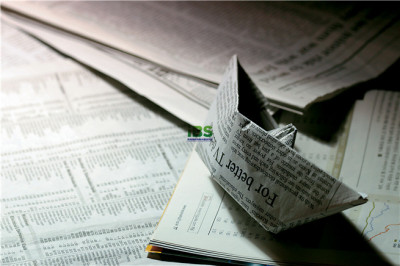 This is the story of Noah. Noah was a righteous man, the one blameless man of his time; he walked with God. He had three sons, Shem, Ham and Japheth. Now God saw that the whole world was corrupt and full of violence. In his sight the world had become corrupted, for all men had lived corrupt lives on earth. God said to Noah, &lsquo;The loathsomeness of all mankind has become plain to me, for through them the earth is full of violence. I intend to destroy them, and the earth with them. Make yourself an ark with ribs of cypress; cover it with reeds and coat it inside and out with pitch. I intend to bring the waters of the flood over the earth to destroy every human being under heaven that has the spirit of life; everything on earth shall perish. But with you I will make a covenant, and you shall go into the ark, you and your sons, your wife and your sons wives with you. And you shall bring living creatures of every kind into the ark to keep them alive with you. Two of each kind, a male and a female; two of every kind of bird, beast, and reptile, shall come to you to be kept alive. See that you take and store every kind of food that can be eaten; this shall be food for you and for them. Exactly as God had commanded him, so Noah did.

And so, to escape the waters of the flood, Noah went into the ark with his sons, his wife, and his sons wives. And into the ark with Noah went one pair, male and female, of all beasts, clean and unclean, of birds and of everything that crawls on the ground, two by two, as God had commanded. Towards the end of seven days the waters of the flood came upon the earth. In the year when Noah was six hundred years old, on the seventeenth day of the second month, on that very day, all the springs of the great abyss broke through, the windows of the sky were opened, and rain fell on the earth for forty days and forty nights&hellip;The flood continued upon the earth for forty days, and the waters swelled and lifted up the ark so that it rose high above the ground. More and more the waters increased over the earth until they covered all the high mountains everywhere under heaven. The waters increased and the mountains were covered to a depth of fifteen cubits. Everything died that had the breath of life in its nostrils, everything on dry land. God wiped out every living thing that existed on earth, man and beast, reptile and bird; they were all wiped out over the whole earth, and only Noah and his company in the ark survived.

After forty days Noah opened the trap-door that he had made in the ark , and released a raven to see whether the water had subsided, but the bird continued flying to and fro until the water on the earth had dried up. Noah waited for seven days, and then he released a dove from the ark to see whether the water on the earth had subsided further. But the dove found no place where she could settle, and so she came back to him in the ark, because there was water over the whole surface of the earth. He waited another seven days and again released the dove from the ark. She came back to him towards evening with a newly plucked olive leaf in her beak. Then Noah knew for certain that the water on the earth had subsided still further. He waited yet another seven days and released the dove, but she never came back. And so it came about that, on the first day of the first month of his six hundred and first year, the water had dried up on the earth, and Noah removed the hatch and looked out of the ark. The surface of the ground was dry.

By the twenty-seventh day of the second month the whole earth was dry. And God said to Noah, &lsquo;Come out of the ark, you and your wife, your sons and their wives. Bring out every living creature that is with you, live things of every kind, bird and beast and every reptile that moves on the ground, and let them swarm over the earth and be fruitful and increase there. So Noah came out with his sons, his wife, and his sons wives. Every wild animal, all cattle, every bird, and every reptile that moves on the ground, came out of the ark by families. Then Noah built an altar to the Lord. He took ritually clean beasts and birds of every kind, and offered whole-offerings on the altar. When the Lord smelt the soothing odor, he said within himself, &lsquo;Never again will I curse the ground because of man, however evil his inclinations may be from his youth upwards. I will never again kill every living creature, as I have just done.